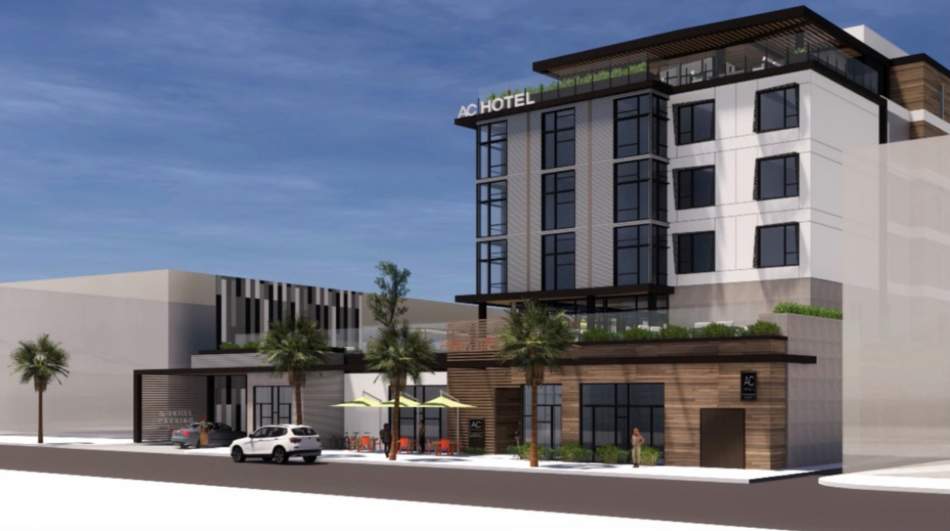 A presentation posted by the Encino Neighborhood Council unveils plans for a new Marriott-branded hotel on Ventura Boulevard. The proposed hotel, which would be called the Sherman Oaks AC Hotel by Marriott, is slated for a property at 15485 Ventura Boulevard.  Plans call for razing an existing 1960s-era development – the 70-room Sherman Hotel – to make way for the construction of a six-story building featuring 159 guest rooms above street-level commercial space and semi-subterranean parking.

Renderings of the project depict a contemporary podium-type building, rising approximately 75 feet in height.  A second-level setback would be used to create a pool deck for guests, wrapped by additional indoor amenities.  The building’s upper floor would include a bar with outdoor seating overlooking Ventura Boulevard.

The project is being designed by WATG.  The developer of the proposed AC Hotel, Irvine-based DKN Hotels, owns a dozen properties in the Los Angeles area, including a second AC Hotel planned in Downtown Burbank.

The development site sits less than a half-mile southwest of the intersection of Sepulveda Boulevard and Camarillo Street, where developer IMT Residential is planning a mixed-use apartment complex featuring more than 300 residential units.

Related Articles
News $5m in bonds approved for affordable housing in Winnetka and Boyle Heights The projects would create 89 apartments The Los Angeles City Council has approved the issuance of more than $58 million in bond financing for the construction of affordable and permanent supportive housing developments in Winnetka and Boyle Heights. Palm Vista in Winnetka will replace automobile-related businesses at 20116-20128 Sherman Way in Winnetka with a four-story […]
News Burbank Downtown: More housing and commercial space are in the works Originally written by Steve Sharp for  UrbanizeLA  June 10, 2021 In an effort to meet its state-mandated housing goals, Burbank is launching a new specific plan which could bring thousands of residents and new commercial developments to its downtown core. The Burbank Downtown Transit Oriented Development Specific Plan, which encompasses a nearly 1,000-acre area centered on the […]
News LA City Dept of Planning proposes “fair share” allocations for affordable housing In the past decade, just 14 percent of the city’s affordable housing has been built in high resource communities. Originally written by Steve Sharp for  UrbanizeLA  June 08, 2021 Across California, cities are in the midst of updating zoning and land use regulations to plan for new housing over the coming eight years.  In Los […]